In light of this article, just published online by the local Volcano newspaper that exposes Canadian corporate mining interests in Bolivia (in relation to the recent imperialist right wing coup in that country), I’m republishing an article I wrote in 2005 which linked Indigenous anti-mining struggles in BC and Guatemala.

A 1954 US-backed coup in Guatemala started a cycle of coups and state repression in that country that would lead to large scale massacres of tens of thousands of Indigenous Maya people in the 1980s, also known as the Guatemalan Genocide and the “Silent Holocaust.”

In 2013, Jose Efrain Ríos Montt became the first former head of state to be convicted of genocide (for the killing of 1,771 Maya Ixil people) by a court in his own country. However a Guatemalan court soon overturned the conviction and he died before a retrial concluded.

Tahltan anti-mining struggle in the 2000s

Mining: Stealing the Land from Under Us

“No matter where you go in the world to do mining you’re going to have problems with indigenous people. But elsewhere in the world many of these indigenous people are armed.”
– Dan Jepsen, executive director of the BC and Yukon Chamber of Mines, Business in Vancouver, issue 753, March 30-April 5, 2004

Mining is one of the most destructive forms of industrial development that Indigenous peoples are subjected to by corporations and governments, as the Dakelh (also known as “Carrier”) people of northern British Columbia know from painful experience. For decades, a Teck Cominco mine dumped mercury into Pinchi Lake, contaminating the traditional food source of the Dakelh and causing early deaths, crippled limbs, cancer, kidney disease, arthritis and birth deformities in those who ate fish from the lake. Neither the company nor the government warned the Dakelh people of the danger. In November of 2004, a Teck Cominco mercury tailings dam failed and spilled over into Pinchi Lake, but once again the corporation left local Dakelh bands in the dark. When the bands discovered what happened they declared a mining moratorium.

Another concern that led to the moratorium was the BC Liberals new Mineral Titles Online system, unveiled in January of 2005. Through the system, corporations staked claims over the internet to more territory in a few weeks than had been grabbed in the entire previous year. Also in January, the Liberals released their strategic Mining Plan, intended to advertise the mining investment potential of the province. According to the Liberals plan, more than 85% of the province has been designated a “mineral zone”, open to exploration, while more than 300 mining regulations have been eliminated and special tax credits have been introduced for mining companies. A major feature of the plan is the existing and potential collaboration between Indian Act band councils, mining corporations and the BC government. Jerry Asp, chief for the Telegraph Creek band of the Tahltan Nation in northwest BC, was featured in the Mining Plan as a shining example of this collaboration. Asp is also the vice president of the Canadian Aboriginal Minerals Association and the Chief Operations Officer of the Tahltan Nation Development Corporation (TNDC), which is bidding on mining projects in Talhtan territory. As band council chief, he is the guy who signs the contracts for the TNDC, giving the go-ahead to his own corporation.

On January 17, a group of 35 Tahltan elders took over the band council office at Telegraph Creek and told Jerry Asp to resign as chief, in response to Asp’s promotion of six major development projects in Tahltan territory. The elders call themselves Dena nenn Sogga neh’ine, which means Keepers of the Land in the Tahltan language.

“We have to protect our animals and fish. If we lose our animals it will be forever, we can’t eat oil, gas and minerals,” said Dempsey Bob, a Tahltan master carver. Salmon are directly threatened by the Nova Gold company’s plan to build an access road along the Stikine River.

In February, the Tahltan elders declared a complete moratorium on resource development within their traditional territory, informing the federal, provincial and Indian Act governments. “It’s not just for us,” said Verna Callbreath a Crow Clan Elder, “it’s for our children and grandchildren of tomorrow.”

Shell Canada representatives from Alberta flew to Telegraph Creek at the beginning of March and were notified of the moratorium by Tahltan elders. “Our land is our kitchen,” said Tahltan Elder James Dennis, “When you bring your poison onto our land, you are poisoning our kitchen. We will not stand for that, so go back to where you came from”. The Shell representatives did as they were told. 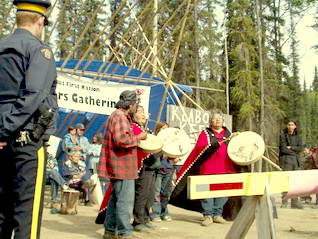 In December of 2004, Jerry Asp spoke at the Guatemalan government’s National Mining Conference, which was sponsored in part by the Canadian embassy and the World Bank to promote mining development in Guatemala. Outside the conference, residents of Guatemala’s San Marcos region demonstrated against the Glamis Gold mining project under construction in their territory. Glamis Gold is a US-based corporation that was incorporated in Vancouver, Canada. The company has also displaced Indigenous people in Honduras and is currently suing the US government through the North American Free Trade Agreement because of costly limitations imposed on a Glamis mining project located within a sacred site of the Indigenous Quechan people in the Californian desert.

On December 3, 2004, Indigenous residents of Sololá, Guatemala, blockaded the Inter-American highway to stop a mining convoy when workers began dismantling a pedestrian overpass to allow the convoy passage. As it turned out, the convoy was headed to the Glamis Gold mine in San Marcos, so the people of Sololá set fire to one of the trucks that was carrying gas and equipment. The convoy was then detained on the side of the highway for more than a month, until the Guatemalan government brought in 800 police and soldiers on January 11, 2005. In the battle that ensued, state security forces deployed more than 1,000 canisters of tear gas and eventually opened fire. Raul Castro Bocel, a Maya-Kakchiquel Indian, was killed and many others were injured.

Throughout March, thousands of Guatemalans rebelled against the government’s signing of the Central American Free Trade Agreement (CAFTA), clashing with police and soldiers across the country. Several people were killed, injured and disappeared when state security forces opened fire on crowds of people. Those Guatemalans struggling against multinational mining companies also took part in the actions against CAFTA, understanding that such trade agreements are easing the way for companies like Glamis to invade and rob the land.

On March 13, in the municipality of San Miguel Ixtahuacan in the San Marcos region, a guard from the Israeli private security company that is paid to protect the interests of Glamis Gold shot and killed Alvaro Benigno Sanchez, a resident of the community.

Currently, Canadian mining companies are exploiting the land of Indigenous peoples all over the world – in Asia, Australia, Africa and Latin America and North America. Many of these corporations are involved in projects in several countries simultaneously, as is the case with Barrick Gold, a Canadian mining giant that is facing indigenous resistance to its projects in Australia, Peru, Chile and Argentina.

Here in Canada, a niobium mine proposed by the Canadian company Niocan has been strongly opposed for several years by the Mohawk community of Kanehsatake in Quebec, and some think this could be a major factor in the underhanded actions of the Canadian government’s imposed Grand Chief James Gabriel, who attempted to raid the reserve with more than 60 Native police officers in January of 2004. Niobum is a rare mineral used in the production of steel and super-alloys for the military. The mine would release radium and other radioactive waste on Kanehsatake and drain and pollute the local water system.

“One does not sell the earth upon which the people walk.”
– Crazy Horse, Lakota Nation

View all posts by mgouldhawke